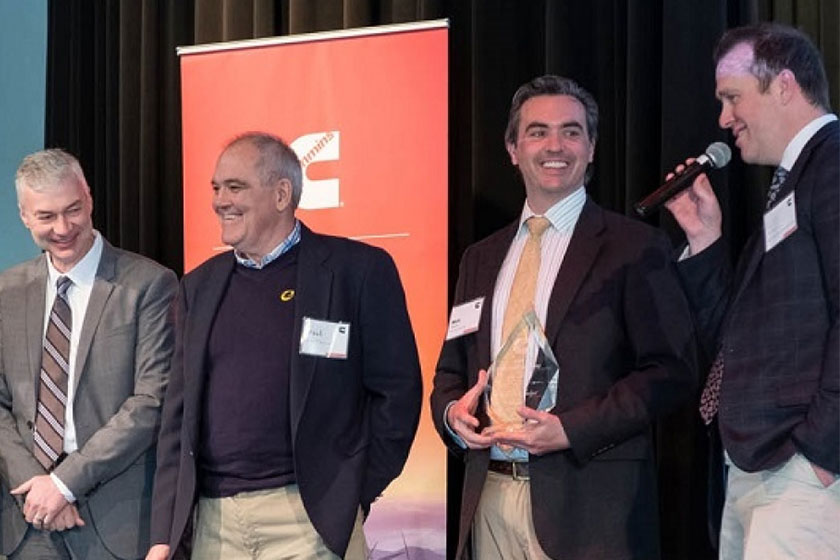 BBC Pump and Equipment and ElectroCell Systems won the inaugural US Cummins Innovation Gateway, beating out stiff competition from seven other finalists.

BBC Pump, represented by Reid Crandall and Nick Dickos, and Electrocell, represented by Paul McLaine, were provided the opportunity to present before a board of Cummins executives and other outside engineers.

From the Cummins press release:

“Reid Crandall knew he had just five minutes to make his case and five minutes for questions to explain to a panel of 10 judges why Cummins needs a system that enhances industrial cooling towers by reducing water and energy usage.

It was just enough time, however, for Crandall and the BBC Pump and Equipment Co. Inc. of Indianapolis, Indiana, to take home top-honors at the first Cummins U.S. Innovation Gateway in Columbus, Indiana, earlier this week.

‘I’ve never been a part of something quite like this,’ said Crandall, Commercial/Industrial Sales Engineer at BBC. ‘I’ve worked with a lot of companies, but not many are trying to solve problems they don’t even know they have yet.’

The judges included five Cummins leaders, as well as sustainability experts from Purdue University, Indiana University and representatives from the U.S. Department of Energy and the Mid-States Minority Supplier Development Council.

Brian Mormino, Cummins’ Executive Director of Worldwide Environmental Strategy and Compliance, said the event produces the kind of innovative ideas and partnerships the company needs to fulfill its mission of ‘Making people’s lives better by powering a more prosperous world.’

BBC Pump and ElectroCell will be working with Cummins to install ElectroCell Systems’ patented side-stream particle precipitators and monitor water and energy savings at Cummins sites in southern Indiana. As the technology proves itself, there will be opportunities to help Cummins save resources at locations worldwide.

Our mission is to provide customer oriented service through the proper application of quality pump equipment.

BBC Pump and Equipment Company supplies superior pumps, equipment and systems; designed, installed and serviced by the best engineers and technicians in Indiana.